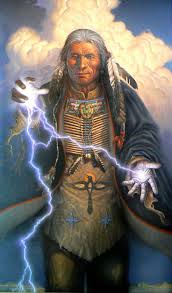 Shamanism can be traced to Siberia from the Tongus Tribe with links to the Manchu of Ancient China.Nowadays they are Mainly in Africa but dotted all over the World still active in Tribes in South America and Aboriginal peoples, but like Wicca is a reinvention of Witchcraft You also have a Neo-Shaman movement. Shamen were known by many names Mystic,Visionary,Prophet with the help of an Hallucinogenic drug.they cross from the living  lifting the vail to the dead. Their Spirit guides would tell them what they wanted the living to hear the Spirits gave support friendship and are path makers. But as well as Mediums these spirits are demons and they want to kill steal and destroy.

Some misguided Christians are becoming Shamans they seem to think Jesus was a Shaman of sorts as nowadays there’s a lack of knowledge of Christ and that’s over the board. But they are gravely wrong and misguided as he was God incarnate not some magician channeling demons. whether Wicca,Kundalini,New Age or Shamanism  it is all the  Occult and Leading the practitioner to follow Satan

“In whom the god of this world hath blinded the minds of them which believe not, lest the light of the glorious gospel of Christ, who is the image of God, should shine unto them.” 2 Corinthians 4:4

And this is paving the way for the coming Anti-Christ all in line with Bible Prophecy I might add.Talking with the dead and using any form of scrying or divination is forbidden

“Now the Spirit speaketh expressly, that in the latter times some shall depart from the faith, giving heed to seducing spirits, and doctrines of devils;” 1 Timothy  4 v 1

“I grew up not in church my mom and dad were not Christians and hardly ever went only on occasion.When I did go I went with my with my grandparents but mainly to see my girlfriend who in years to come ended up being my beautiful wife. I got baptized at the age of 12 although I felt pressured into it.And this is when the enemy reared his ugly head I got into rock music early in my life, stuff like Kiss . It really took hold of my life I then got into stuff like AC/DC and by my early teens Motley Crue became my life, I really like worshiped them.

I wanted to be just like my favorite rock band, I started acting like them and dressing like them and partying like them. I was doing drugs and a lot of alcohol by my early teens and by now wanted nothing to do with church or anything Christian. I considered all Christians bible thumpers who wanted me to stop partying and having fun. I heard Ozzy Osbourne use that name for Christians and he was also one of my rock heroes. I was in total rebellion to God and wanted to be like my rock heroes.

The drugs and drinking got worse and by my early twenties I was doing a lot of coke and acid and drinking very heavy. I was selling drugs to pay for my habit. I was reading High Times a lot. I’d read about how people could get to God through drugs, this religion was called Shamanism, that was interesting to me. I then come across the movie The Doors, this really got me interested in Shamanism and the occult world.

Jim Morrison was a Shaman and from the movie, it looked like it was so cool. I ordered a book out of High Times on how to practice Shamanism. I started doing the things it told to do in the book. I realized after a little while I had opened myself up to a very real and demonic world. I was having nightmares and I could feel evil around me all the time. I was really scared, my sister told my mom that I was messing with some weird religion.

My mom, who wasn’t a Christian at the time, said I may be eating the forbidden fruit mentioned in the bible. That really made me think and scared me even more. Around the same time, a program came on tv about last days prophecy, some were bible prophecy and some was stuff like Edgar Cayce. I watched it and that even made me more terrified. I decided to go get a bible to see what it really said. I knew the devil was real by the Shamanism and realized I was in deep trouble. I wanted help and if the devil was real, God must be also.

I drove to a bookstore and bought a bible and started to read, deep conviction fell on me. I realized I had been serving the devil and evil was taking me over, I felt like something was trying to possess me. I kept seeing repent everywhere I read, I was so scared. I begged God to save me and change me. I begged him to help me not to be deceived, to please give me discernment, to not be deceived like that again. He changed my whole life and delivered me from Satan’s power. I really devoted my whole life to Him and started studying the occult from the Christian viewpoint and really got into bible prophecy.

For what shall it profit a man, if he shall gain the whole world, and lose his own soul?Or what shall a man give in exchange for his soul? Mark 8 v 36-37

The Lord let me get into the occult world and used it to bring me to Himself. I think it took those demonic experiences to get me to look to Him for help. I have now been serving the Lord for over 13 years and trying my best to help people to see the deceptions of Satan and the occult world. I think God can even use Satan and the occult to bring us to Himself and to salvation. My main goal in life now is to serve him with all my heart and to expose Satan and his deceptions and to bring as many people as I can to the truth of Jesus Christ.”

More about Donald :-Saved by grace through faith  I can’t thank the lord enough for what he has done for me. My goal in life now is to grow closer to the lord and the knowledge of his word and to help others to come to saving faith in the lord Jesus Christ. I also want to expose the evils of the secret societies & the coming new world order I want to wake people up to the fact we are living in the last days and to warn them to get right with God Because Jesus is coming soon!!! I am interested and involved in the Christian truth movement.

Donald has of late fell ill and last year had to fight C-Diff for over 6 months and is waiting at the moment for Test  results could you please keep him in prayer that the tests come back all clear. If you like reading Testimonies you might like Redeemed From Satanism- Jeff Harshbarger and please like and subscribe.

To Contact Donald:-Donald’s Watchman On The Wall Minsitry at My Space